Posted on August 6, 2017 by documentaryfestival 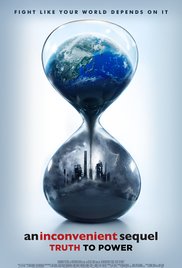 A decade after An Inconvenient Truth (2006) brought climate change into the heart of popular culture comes the follow-up that shows just how close we are to a real energy revolution.

AN INCONVENIENT SEQUEL: TRUTH TO POWER is the sequel to the 2006 Academy Award Winner for Best Documentary AN INCONVENIENT TRUTH starring Al Gore where the former Vice-President of the United States championed the fight on global warming. In that film, the effects of global warming were convincingly portrayed on screen, rallying uncountable numbers of followers to fight against global warming. After more than 10 years, many of that film’s predictions (the best example used being the flooding of the World Trade Centre grounds), laughed upon by skeptics have come to pass. This sequel is timely and premiered at Sundance early…

Submit your short DOC and get it showcased at the FEEDBACK Film Festival
View all posts by documentaryfestival →
This entry was posted in Uncategorized. Bookmark the permalink.